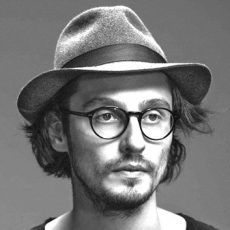 Since 2008, Thibaut has been specializing as a director-designer – film and interactive content. His personal and advertisement work has been published and has won many awards internationally. In 2012, he was named amongst the “Young Guns” by the Art Director’s Club of New York, who put him amongst the world’s best 37 creatives under 30.

In 2013, he launched his own studio – Gentilhomme – in order to work in complete autonomy. He put in place a production system for vertical integration of cultural and entertainment works.

Combining his experience in music, photography, programming, animation and film, Thibaut truly is an interdisciplinary artist.

Thibaut is an aggressive perfectionist with a big – although selective – heart. The universe portrayed in his work is funny, monstrous and sensual.