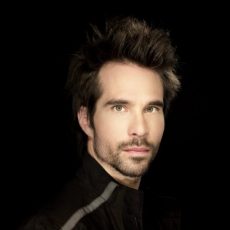 Martin Villeneuve’s feature debut, the pioneering, sci-fi romance Mars & Avril, starring Robert Lepage and Caroline Dhavernas, cost only a stunning $2.3 million to produce and led him onto the TED stage to share the special secrets of his achievement. His TED Talk has been subtitled in 31 languages and viewed more than a million times. Mars & Avril has been described by io9 as “one of the most beautiful, and immersive, sci-fi worlds ever put on film.”

Martin Villeneuve is a Montreal-based screenwriter, director and producer. He studied film at Concordia University and graphic design at Université du Québec à Montréal. In 2002, he received an award from the advertising agency Sid Lee for the quality of his portfolio. In the years that followed, he worked as an artistic director with this agency and especially for Cirque du Soleil. In this capacity, he created award-winning advertising campaigns for shows like Zumanity, KÀ and Corteo. He also directed numerous TV commercials for Cirque du Soleil, in addition to music videos and short films. As an author, he has written and created the comic book La voix du tonnerre, as well as the two graphic novels Mars & Avril, which were all released to critical acclaim.

In 2012, he completed his first feature film as writer-director-producer, Mars & Avril, based on his graphic novels — world premiere in Karlovy Vary, 20 international festivals, 3 awards and 10 nominations including one for Best Adapted Screenplay at the Canadian Screen Awards. In addition, the inventiveness of the film’s production won Martin an invitation to give a TED Talk in Long Beach, California. He is the first — and so far, the only — TED speaker from Quebec, and the third filmmaker so honored, following in the footsteps of famed directors James Cameron and J.J. Abrams.

In 2014, Martin Villeneuve won 3 awards for his short film Imelda, including the Union des Artistes’ Best Actor Award at the 12th Prends ça court ! Gala. In 2016-2017, he directed the first episodes of the second season of Real Detective for Investigation Discovery Channel and Netflix.

Among other projects, he is currently writing for GO Films the adventure-comedy Red Ketchup, based on Quebec’s cult graphic novel series. He will once again team up with Belgian comic book artist François Schuiten when he will direct the movies Aquarica and Waternova for Item 7. He just shot two sequels to his short film Imelda, with Robert Lepage and Ginette Reno, and he will also speak at C2 Montreal in 2020. With Martin Villeneuve, Quebec talent radiates internationally.