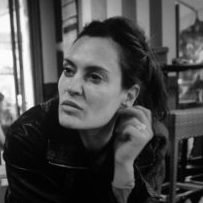 Since graduating from the Conservatoire d’art dramatique de Montréal in 1990, Brigitte Poupart has appeared in more than thirty theatrical productions including both mainstream and experimental works. She has been involved in international tours that have taken her to Australia, the United States, and Europe. She co-founded the theatre company Transthéâtre, in which she wrote, directed and produced her own creations (www.transtheatre.com)

She directed the last show of the Cirque du Soleil Luzia wich is now on world tour.

Her first feature film Over My Dead Body was screened at the closing of the Rendez-vous du cinéma québécois, featured on the list of the contenders at the MoMA in New York, was presented at HotDocs in Toronto, Raindance Festival in London, at the Antenna Festival in Sidney, Hamburg, Munich, Tel-Aviv, Singapore, Helsinki and Copenhague. Brigitte Poupart received the Jutra Award (Quebec film awards) for best Documentary for this film, as well as the Grand Prize for Artistic Creation from the Conseil des Arts et des Lettres du Québec (Quebec Council of Arts and Literature). She is now in preparation for a 360 fiction film, a new creation for theater and she is part of the new film of Robin Aubert Les Affamés.

She plays Sabrina in the European tour (Spain, Germany, France, Belgium) of A little bit of tenderness for criss sake by Dave St-Pierre. For five years, she acted in the television sitcom Catherine broadcast on Radio-Canada, which earned her a nomination for a Gemini Award. Ms. Poupart has also worked in film, including a role in Philippe Falardeau’s film Monsieur Lazhar. Known for her large-scale staging and design of musical performances and concerts, (Jazz Festival of Montreal, Festival d’été de Québec, Francofolies de Montreal) she has worked with, among others, Patrick Wason and The Barr Brothers. At the Gala de l’Adisq (Quebec music awards), she was nominated for several shows. She also directed the Gala de l’Adisq and the Gala des Jutra, both broadcast on Radio-Canada. She received Gemini nominations best production for the last ADISQ Galas (2013-2014 and 2015).