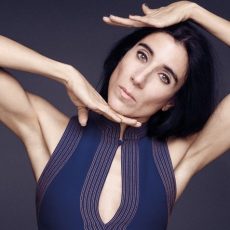 Blanca Li is a director, a choreographer, filmmaker. Whether she is working with her own company, or creating events, musicals, staging operas, directing feature films, preparing museum installations, even working with circus artists, she invents and produces a multitude of projects: “I like bringing alive everything I have in my head.” Enthusiastic for new challenges and for cultural mixes, and constantly renewing herself, she takes inspiration from a wide range of sources, from dance to music, new technologies, theatre, cinema, opera, fine arts… With Blanca Li, everything begins and ends in the energy of movement and dance.

Born in Granada, Blanca Li became a member of the Spanish national rhythmic gymnastics team at the age of twelve. At seventeen, she moved to New York, where she studied for five years with Martha Graham, and in other dance schools, like Alvin Ailey’s, Paul Sanasardo’s, and at the Clark Center. Living in Spanish Harlem, she daily witnessed the development of hip-hop as it was emerging, creating at the same time a flamenco-rap group, las Xoxonees. When she returned to Spain, she founded her first contemporary dance company in Madrid, which was selected for the program of the Universal Exhibition of Seville.

Having settled in France in 1992, Blanca Li founded her company in Paris in 1993, and has thus far created 20 works for her repertory. In 1998, she opened her own dance studios in Paris (Studios Calentito). The fusion of disciplines and genres is frequent in her creations, as is a very Latin sense of humor (Alarme, Stress, Salomé). Macadam Macadam, a choreographed hip-hop show, opened the Suresnes Cités Danses festival in 1999. From Avignon Festival to the Opéra-Comique in Paris, that show became the reference in the genre and obtained the Globe de Cristal for Best Opera or Ballet from the French press in 2007. Her one-woman show Zap ! Zap ! Zap ! (1999) was presented at Chaillot, among other French venues, and then in New York as part of the French Moves festival. Blanca Li takes on a wide range of themes with her company, ranging from the Gnawa trance ceremonies of Marrakesh (Nana et Lila, 1993) to ancient Greek art (Le Songe du Minotaure, 1998), to the madness of the contemporary world in the context of the September 11, 2001 terrorist attacks (Borderline, 2002), to the poems of Federico García Lorca (Poeta en Nueva York, 2007) and the pictorial work of Hieronymous Bosch with Garden of Earthly Delights (2009), which opened the Montpellier Danse festival. Corazón Loco (2007) mingled the company’s dancers with opera singers from the Sequenza 9.3 vocal ensemble in a contemporary musical work and was the subject of Blanca Li’s second feature-length film. Elektro Kif (2010) brought to the stage for the first time the électro style, a new urban dance born in the Paris suburbs in the 2000s and that took the world by storm with its ultra-fast and sophisticated gestures. Robot, created for the 2013 Montpellier Danse festival, in collaboration with Japanese artists from the Maywa Denki collective and NAO robots from Aldebaran Robotics, triumphed at the Théâtre des Champs-Elysées in Paris in December 2013 and is still touring in 2018. Since then, she has created three new pieces. Goddesses and Demonesses , a duo for Blanca Li and Maria Alexandrova from the Bolshoi ballet was created in 2015 at the Theatre of the Champs-Elysées.

She presented Solstice at the National Theatre of Chaillot in September 2017, a committed piece about Men and Nature. Elektrik, her latest creation with eight electro dancers has been presented in the Suresnes Cité Danses in January 2018.

She has been directing operas, musicals and many events, in particular for designers like Jean-Paul Gaultier or Stella McCartney in the fashion world.

Among many others, she has staged and choreographed the opera Treemonisha from Scott Joplin at the Chatelet Theatre in Paris. She created El Amor Brujo from Manuel de Falla, the ballet Les Indes Galantes from Rameau, the musical Enamorados Anonimos, the cabaret “C’est Rouge!” at the Faena Theatre in Miami …

She has directed three feature films and she is now more and more working with new technologies and especially virtual reality (VR).