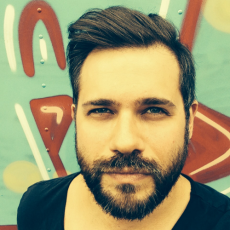 With close to 20 years experience in the field of creative entertainment, he has contributed to all aspects of project creation, from inception, as a concept and storyboard artist, costume designer, to writing, pitching, to ultimately directing. Immersing himself into the chaos of abstract thought and emerging with a clear vision tailored to the needs and objectives of the project are second nature to him.

Bastien is absolutely sold on the creative process and its inner workings. He is addicted to plunging head first into it and orchestrating the chaotic collage of minds, parameters, technical realities, personalities and talents to achieve an ultimate vision.