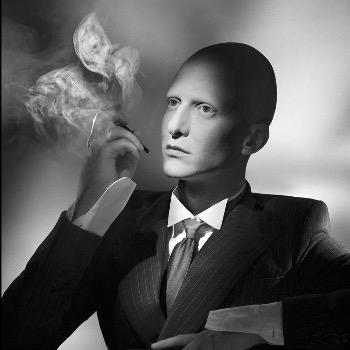 Ali Madhavi is an artist whose plurality allows him to range from photographer, multimedia artist to film and artistic director. He lives and works in Paris.

In 1981, after fleeing Iran with his family, he decided to follow an interest in Art at the famous Ecole Boulle in Paris. Attracted to the world of fashion, he joined the Ecole Duperré. In 1992, he is hired as a stylist in the Thierry Mugler’s Fashion Studio and works there for two years. In 1996 he is admitted into the National School of fine Arts in Paris where he graduated with honors. From January to June 1998, he was an exchange student in the department of painting at the Royal College of Arts in London.

His work in advertising campaigns for famous brands (photographs and videos), prestigious magazines and the shooting of many fashion and movie stars follow an exhibition of his work at Galerie 213 for which he is spotted by fashion scouts when only 26 years old. Very soon he gained the title of the « Ambassador of Glamour », skillfully playing with light in order to magnify and reveal an exuberant and mysterious beauty, inspired by the sparkle of the Hollywood glamour of the 30’s, 40’s and 50’s. He consecutively became the Artistic Director of the Crazy Horse Paris and directed the Desire revue, with choreographer Philippe Decouflé. In 2011, he won the Grand Prix du Centre du Luxe.

In 2001, his work was exhibited in the Edward Mitterand Gallery in Geneva then in the Scout Gallery, in London, in 2003. Some pieces of his artwork have been bought by the Maison de la Photographie de Paris and the Design Museum of London.

In 2013, he makes a short film, Forbidden Love, in which he explores the darkness of incest and death. He is presently co-writing a film called Kâbâret Golestan with Jean-Claude Carrière. His work was exhibited at the Galerie Gouvernnec Ogor in Marseille in May 2015.